LOS ANGELES (November 8, 2019) – Arch-Con’s Industrial Division is utilizing wood roof decking in California for its Bridge Point Vernon and Bridge Point Ontario projects to save on cost and time as well as cater to the climate in “The Golden State.”

Due to California’s mild weather, wood roof decking is commonly used in commercial construction. The state boasts 70-degree weather, low humidity, and little rain or moisture virtually year-round. Because the region has mild weather, a stronger material such as metal decking, widely used in other areas of the country, isn’t needed. Additionally, the state is prone to earthquakes and the plywood allows for more flexibility compared to metal decking.

In general, a wood decking system is more economical ($2 to $3 less per square foot than metal decking) and can be installed faster. A project’s structural engineer typically specifies whether wood decking or metal decking will be used on the structure, unless the tenant has a specific request. Metal decking is acceptable and used on occasion.

How the wood decking is installed 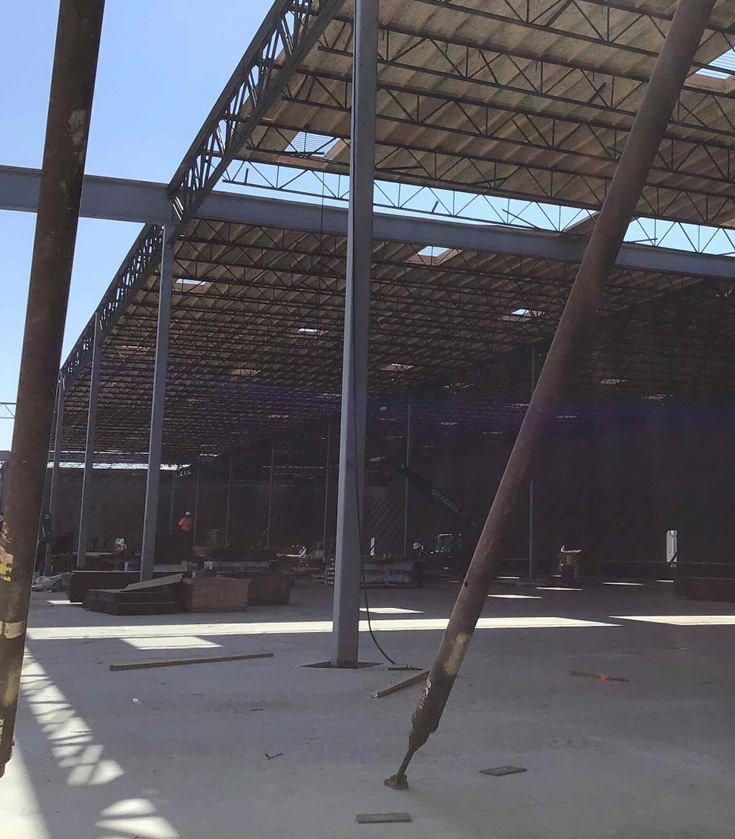 With the wood decking system, open web steel joists are spaced on the building floor slab (rather than on the roof in metal decking). This process is called tabling. Sub-purlins are installed between the joist, and oriented strand board sheathing is attached to gutters, creating a section of the roof. This section then is lifted while in place and attached to the pre-installed steel girders or beams. The subcontractor has a crew “panelizing” the system on the floor and another one nailing the system in place once it is lifted.

Comparatively, a metal deck roof system must be welded after being placed (joists are installed on the roof rather than the floor slab) and the surface is flattened which prolongs the time another trade can gain access to the roof. A substrate system, typically a perlite board, must be installed due to the flues of a metal deck sheet. This step adds cost to the project and prolongs access for other trades.

Bridge Point Vernon is Arch-Con’s first project in California. It is a redevelopment close to completion in the well-established industrial city of Vernon. Arch-Con’s second project, Bridge Point Ontario is a two-building industrial development totaling 268,714 square feet and broke ground on 11.9-acres in Ontario, Calif. Both were designed by California firm Herdman Architecture + Design and developed by Bridge Development Partners.